A brief History of Chelsea FC

The Blues of Stamford Bridge

South London club, Chelsea F.C., were established back in 1905 and have gone on to become an international football powerhouse, particularly in the last fifteen years. Since the 1950s, Chelsea have been affectionately nicknamed The Blues due to their tradition of playing home games in royal blue shirts – a design inspired by the racing colours of Lord Chelsea. The London club have won a wide variety of silverware in their lifespan, with highlights including five Premier League wins, seven F.A. Cup trophies, five League Cup trophies and a Champions League victory. The current club record for appearances is held by defender Ron “Chopper” Harris and the highest goal tally belongs to midfielder Frank Lampard who scored 211 goals for The Blues. Chelsea have a number of fierce local rivals across London, with fellow Premier League competitors West Ham and Tottenham Hotspur perhaps and most notorious and further down the Football League, sides such as Millwall and Q.P.R. offer Chelsea fans consistently heated fixtures. Chelsea’s recent successes have seen them develop a competitive rivalry with clubs such as Manchester United and Arsenal, the latter partly due to a feisty rivalry between former Blues boss Jose Mourinho and current Arsenal manager Arsene Wenger. Many Blues fans even consider Spain’s F.C. Barcelona rivals, thanks to a number of hotly contested and combustive European matches in recent times. Ever since the club was founded, Chelsea F.C. have played their home matches at Stamford Bridge, although the stadium has seen several significant renovations within that time. Similarly, the club’s crest has undergone various makeovers, with the current Lion-crested badge first introduced in the fifties and given several modern modifications since.

Chelsea F.C. were founded by businessmen, football fans and brothers Gus and Joseph Mears at The Rising Sun public house. Mears had already purchased the Stamford Bridge stadium – then used for athletics – with the intention of turning it into a football ground, only to find that local side Fulham F.C. were not interested in using it. Undeterred, the businessman decided to establish a brand new club to utilise Stamford Bridge and after choosing to name the team after the nearby borough of Chelsea, the newly formed side were soon accepted into the second tier of the English Football League. It didn’t take The Blues (then nicknamed The Pensioners) long to achieve promotion to the First Division, however Chelsea were unable to consolidate their position in England’s top league and spent a number of years flitting between the two divisions. Despite their lack of competitive success, Chelsea were well supported in their early days and this allowed them to spend money on reputable players such as William Foulke and Frank Pearson. Perhaps Chelsea’s first true superstar, however, was hotshot striker George “Gatling Gun” Hilsdon who scored five goals in his debut match and was the first player to reach the milestone of one hundred goals for the club, yet it would take more than big names for Chelsea to make their silverware breakthrough. 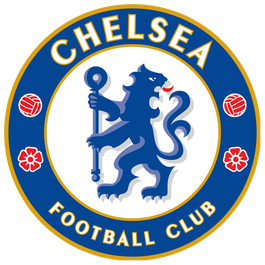 In the aftermath of World War II, Chelsea recorded their highest ever attendance at Stamford Bridge with an exhibition match against Dynamo Moscow; over 100,000 people were estimated to be in attendance. However, The Blues would be forced to wait until 1955 for their first real taste of glory, with that year finally seeing them conquer the League. The man responsible for turning the club’s fortunes around was manager Ted Drake who oversaw a number of significant alterations to the structure of Chelsea football club as a whole. Gone were the days of expensive big name players and in came a team comprised of younger, harder working individuals who had paid their dues in the lower leagues. Drake made considerable improvements to the club’s training regimes and their youth set-up, building upon work done by previous manager Billy Birrell, and Chelsea’s new youth and scouting systems would go on to produce prime players such as Peter Osgood, Jimmy Greaves and Ray Wilkins. Although the 1955 Championship win should have enabled Chelsea to compete in Europe, disputes with the Football League and F.A. prevented Chelsea’s first foray into what is now the continent’s most prestigious club competition. Chelsea would fail to effectively capitalise on their initial success and the side would soon garner a reputation for coming close to glory, before falling at the final hurdle, with the next piece of silverware coming in the form of the 1964/65 season’s League cup. Despite the cup win, the 64/65 season typified Chelsea’s also-ran status, as the club were on course to complete a domestic treble that season, only to come undone due to ongoing tensions between manager Tommy Docherty and several key players. Further cup glory awaited the Blues in the early seventies with manager Dave Sexton bringing both the F.A. Cup and European Cup Winners Cup to Stamford Bridge.

As the seventies progressed, an expensive attempt at redeveloping Stamford Bridge caused a number of financial problems for Chelsea. To compensate, players had to be sold and at one point the club were even in danger of losing their home ground altogether to property developers. To add to their woes, on pitch performances were declining, dressing room morale was deteriorating and hooliganism was on the rise in the stands. The London club were soon relegated once again in 1975 and six years later, Gus Mears would resign as chairman, ending his long held association with the club. Before departing, Mears installed John Neal as manager and what followed was a valiant effort from the new coach to build a cheaper, more efficient Chelsea side and the club managed to both return to the First Division and find some semblance of stability, even if trophies continued to elude them. Despite this upturn, Chelsea’s period in the doldrums would continue until the appointment of Dutchman Ruud Gullit as player-manager who succeeded in attracting star players to the club once again and led them to F.A. Cup victory in 1997. Gullit introduced a slick, attractive and technical brand of football at Stamford Bridge and his successors would build upon his achievements with a number of domestic and European cup successes and gradually improving league positions.

In 2003, Russian billionaire Roman Abramovich took over ownership of Chelsea F.C., transforming the club into Britain’s first mega-rich football club. The Russian, along with manager Claudio Ranieri, guided Chelsea to a second place league finish, their highest in almost fifty years, however the manager and owner failed to see eye to eye and the Italian was soon shown the door. With Abramovich’s funds, the Blues would go on to hire Champions League winning manager, Jose Mourinho, as well as players such as Didier Drogba, Ashley Cole and Petr Čech, all of whom would go on to become integral figures for Chelsea in the years to come. With increased spending power came increased success and Mourinho swiftly led the Stamford Bridge side to back to back Premier League titles, an F.A. Cup and two League cups. Unfortunately, the Portuguese manager failed to deliver any European silverware and because of this – as well as reported disagreements with the club’s owner – Mourinho was ousted from Chelsea football club. The Blues would subsequently work through a revolving door of managerial appointments involving the likes of Luiz Felipe Scolari, André Villas-Boas and Carlo Ancelotti, the latter delivering the first League and F.A. Cup double in the club’s history. But it was the unlikely managerial appointment of ex-Chelsea midfielder Roberto Di Matteo that finally delivered The Blues Champions League glory in 2012 against German side Bayern Munich. The achievement made Chelsea the only London club to win the competition, as well as the only British club to have won all three UEFA club tournaments. Despite delivering the silverware Roman Abramovich craved, Di Matteo was also soon shown the exit door and Chelsea continued to work through a procession of managers, leading them to their current boss, former Italy and Juventus coach, Antonio Conte.